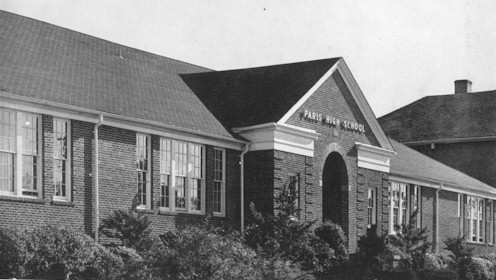 Paris School was perhaps the most unique in location of any school in South Carolina.  The school was located in the midst of a former U.S. Army campground - Camp Sevier.  The entire 30th Division of World War I was trained here.  This division was also known as the "Old Hickory division."

In the early part of the twentieth century Paris School was known as "Mountain Academy."  It was a small, two-room wooden structure situated in the vicinity of the Mountain Creek community of today.  In 1912 the present site was donated by Mr. C.A. Green.  When the school was moved to this site, the name was changed to Sandy Plains.  After a few years passed, the name was changed to Paris School.   It is believed to have been given the been given this name because of its nearness to Paris Mountain, which was named in honor of Richard Paris, one of the first white settlers in these parts.  He was a great hunter and was a Tory Captain.

At the outbreak of World War I, Paris School had to move, vacating the site for the center of Camp Sevier.  The school was moved to the intersection of Paris Mountain Road and Mountain Creek Road; here it remained until the close of the war and then was moved back to the present location.

In 1926 several new rooms were added.  This was the brick two story building that held all of the classrooms.  Mr. R.I. Barton was the superintendent of Paris School and remained so until 1933.

The first class graduated in 1930 with one girl and six boys.  The entire school consisted of approximately 235 students and 10 teachers.  In 1933 Mr. Ira B. Lever was elected superintendent and in 1939 a high school building ws added.  Up until 1947, Paris School consisted of eleven grades.  In 1949 the 12th grade was added.
.

.
Mr. J.M. Dean became superintendent in 1948.  The 1960 graduating class was the last class from Paris High School.  Students the following year were moved to the new Wade Hampton High School on Pine Knoll Drive.  In 1976 the old Paris School building and auditorium were torn down.
.

In closing, we hope this history reprinted from the Parisian; Remembered!
will help each one to savor the memories of a time and a place that is no more.


© 2014 SCIway.net, LLC All rights reserved. No part of this website may be reproduced