Memories are dimmed by time, but the following is some of the history of Tanglewood/Westville School. The name was changed from Tanglewood to Westville about 1925.  The class of 1934 had a sign installed on the side of the building identifying the school. The district was 8-F on the Greenville County tax books.  It was bound on the North & West by the Berea community, on the South by Welcome, on the Southeast by Judson #2, on the East by Brandon Mill village and town limits of West Greenville, and on the Northeast by Woodside Mill village.  A large portion of the students came from outside the district lines, which in most cases meant the students preferred to walk greater distances to attend "Westville".

The first Tanglewood building was a two-room frame structure, probably built around 1920. B.B. Smith, Jr. remembers his father was Chairman of the Board of Trustees with the other two being Waco F. Childers, Sr. and Fred Hill who "burned" the mortgage for the school in 1923.  Early teachers were Ms. Lillian Hunt, Ms. Grace Talley, and principal Mr. Guy Snow. The next two-story brick building was built in 1924-1925 when the name was changed to Westville.

Sterling G. Elrod became the principal in 1925. along with him came our beloved Annie Pruitt Cunningham, who was still alive in 1991.  A school year was eight months until 1925.  It became a full fledged high school in 1931-32 with the first graduating class of eight students (Thelma Caldwell, james Arthur Carnes, Jr., Hazel Cox, Joe Patterson, emily smith, John Tannery, Ralph Southerlin and Everett Wood). It was a Class "C" high school since it has less than a total of 100 students.

The taxes received from the county treasurer went for salaries and basic maintenance.  Sports equipment and other incidentals were paid for by funds raised by the Tanglewood Community Club (today's PTA) which would hold auctions, Halloween carnivals, etc. Mrs. T.M. Cochran was elected club president from 1931-1947. Mr. Elrod, Westville principal, had to get money from the community club to purchase the two basketballs (one for girls & one for boys) each fall to start the season.  They also provided the basic uniform shirts and shorts, with the players providing their own shoes & socks.  Since the school had no gym little money was available for the athletic program in which all games were played away.  Mr. Elrod would transport the entire baseball team in "our Ford." He never referred to the automobile as "my" Ford.

The school's "Soup Program" was the forerunner of the school lunch program. During the 1930's depression it was determined that many students over the nation did not gave adequate food. The Federal government released at this time stocks of canned and dried food to be used in schools. Each school had to prepare their own menus at no cost to the government.  Though the meals were often more than just soup, since the first meal or two was soup it got tagged as "Soup Program."  Since there were no stoves or kitchens in the school, the preparation was done in various homes on a rotating basis.  Mr. Elrod would always pick four boys to go to his house and get "our Ford" and go after the food and distribute the meals to the classrooms.  Each student had to provide their own bowl and spoon.  One day when returning the empty pots, the driver hit a sandbar on the shoulder of unpaved Saluda Dam Road and turned "Our Ford" over on its side.  The mishap was reported back to school and some help arrived to roll the car back onto its wheels.  Not even a glass was broken as "Our Ford" was started and continued on its journey.

While playing baseball on the small grounds, it was not unusual for a foul ball to get a window pane. The batter was supposed to bring 35 cents for a new pane. With salaries of adults at 10 cents per hour, that was no small requirement.

There were no electric fans or any other cooling devices, so the only light bill was for an occasional cloudy day or an infrequent night event. There were no water bills because water was provided by a well and hand-pumped.  The commodes and urinals never broke down in the two outhouses.  Heat was provided by coal-fired pot-bellied stoves, - one to a room where ten unlucky, early arriving boys had to cut kindling and start fires.  A carload of coal was bought each summer, with the excess made available to residents for about $5.00 per ton.  Those attending the latter years had the luxury of a janitor, lunch room, gym, and flush toilets.

There was no graduating class in 1948 due to the addition of the state required twelfth grade school curriculum.

Westville was transformed into an elementary school and continued being used in that capacity until the spring of 1966. The constructions of Tanglewood Middle School and Alexander Elementary were completed by that time, students were assigned to new schools and Westville closed. It was sold to Verdae, who housed antiques inside for a few years, and then sold to Jones' Mortuary. It is now Westville Mortuary. A copy of the Alma Mater hangs on the wall leading to the auditorium. In your picture of the rear of the building, the  section in the foreground was built as housing for the teachers while a high school. It was transformed into classrooms later. I'm not sure if this was before or after becoming an elementary school. The teachers' housing was demolished by Jones' Mortuary during remodeling in order to build a covered drive and parking lot. I believe this was in the early to mid 1980's. My father graduated the 11th grade at Westville High in  '37. The 12th grade was added at a later date. I believe there is a cornerstone on the end of the building at Page Drive that may contain a date. Those of us who attended Westville are thrilled it still stands and hope it always will. 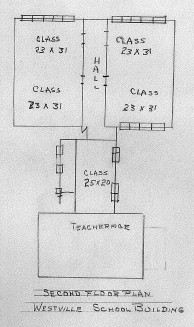 We are soliciting information, history, and pictures for this web page.


© 2014 SCIway.net, LLC All rights reserved. No part of this website may be reproduced
or transmitted in any form or by any means without written permission from SCIway.net LLC.